Are you being a jerk? 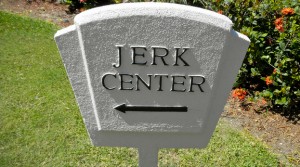 Patrick Lencioni is one EOS‘s favorite authors. See my business book list  which contains four of his books. He also writes great articles. One great one recently is his point of view about The jerk Factor. You can read the entire article here. The gist of the article is that there is a difference between being a Jerk and being a jerk.  Jerks with a capital J are obnoxious people that no one wants to associate with over time.

In EOS terminology, we exhort our clients to be open and honest. That is what Lencioni is referring to when he talks about being a jerk, with a lower case j. He also says that there are two kinds of jerks,- active and passive. Passive jerks are too fearful to risk the sting of being considered a jerk by their peers. They keep there observations to themselves. Active jerks stand up and are counted. They say the things that need to be said for the greater good, recognizing that for awhile people will think they were jerks.

Here are some examples of being a jerk in a small company,-

Anybody on the receiving end of questions like these may think you a jerk initially, but the damage being done to the company due to inaction far outweighs the pain. This isn’t easy. It takes a great deal of trust in the business. But it is the right thing to do. These were hypothetical people issues. This applies to process issues as well,- doing things the same way because we have always done them that way. EOS offers tools for dealing with either of these kinds of issues,- the People Analyzer and the Getting What You Want tools. You can download them for free here.

What is the most difficult situation you have had to face in your business? I hope you are not being a passive jerk about it.

Do You Have a Recruiting Process?

Do You Have a Recruiting Process?