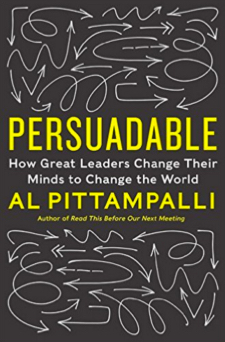 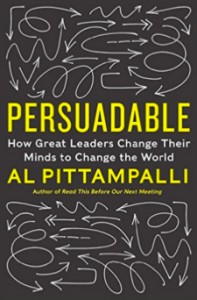 Al Pittampalli has written a new book, Persuadable: How Great Leaders Change Their Minds to Change the World .

What I took away from the book is that is important for all of us to be willing to be persuadable. If we only see the world through a single lens, then we are condemned to living in an echo chamber, which reinforces what we were were raised to believe or came to believe, and rejecting anyone who doesn’t agree with us. We see this in the great divide that has separated the political parties. We see it in social media where people in different tribes rant at each other.

The book is chock full of really current examples of leaders. and average human beings, who were willing to change their minds in light of new evidence presented to them through their own research or interaction with people of different world views whom they trusted and were willing to grant some leniency. Pittampalli exhorts us to consider becoming persuadable and to focus on our own tribes.

Given how much power and influence business owners have in their own companies, this idea is particularly important for business leaders.Consider all the parts of your business which are at risk for being blind to a changing reality,- your product set, your channels to market, your competition, your industry. He doesn’t suggest being a flip-flopper but he also suggests not to be fearful of changing your mind given appropriate counter evidence. One of his techniques sounds like an EOS prescription – 3 strikes. In his case, he is referring to a simple method for changing a long held position. Each time you are exposed to a contrarian piece of evidence, consider it a strike against the belief. When you have accumulated 3 credible strikes, it is probably time to consider a change. He acknowledges that not all strikes are equal in merit or significance, so this is not a one size fits all rule, but a good starting point.

He offers seven practices of persuadable leaders; I particularly like the first four:

Read this book. You can buy it here on Amazon. You will find some nuggets in it for use in your business. 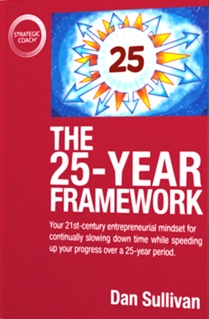